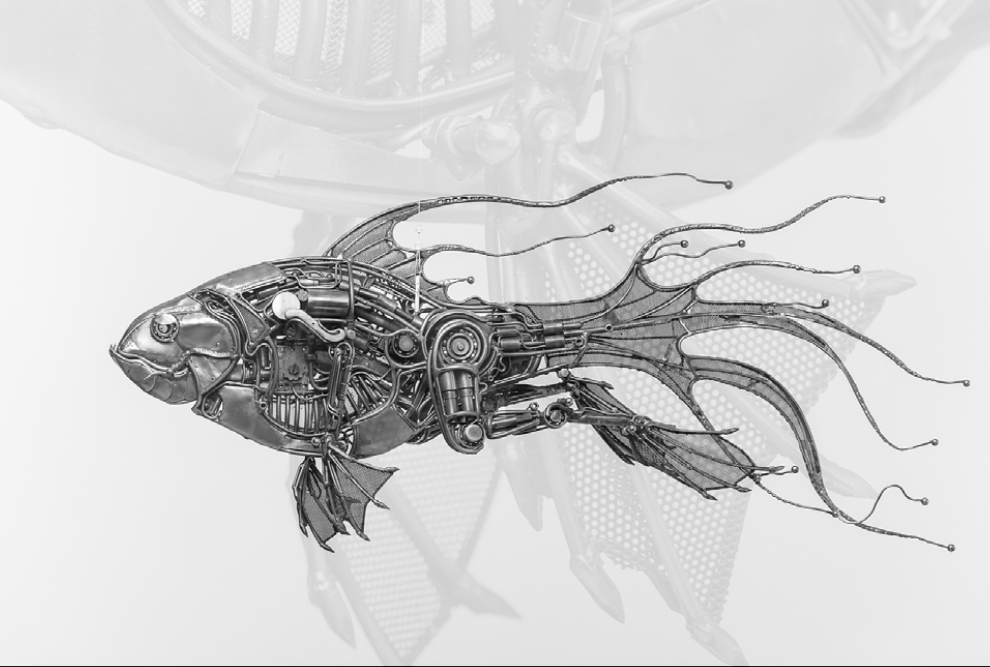 POP UP MUSEUM presents an exhibition of sculptures by Denis Kulikov “Alternative Evolution”. Amazing pieces of scrap metal surround the viewer, beckoning into their own bizarre world and into a new space of a different reality.

Denis Kulikov was born in Yaroslavl in 1978. Having connected the profession with metal and spare parts, he began his artistic career with the idea of ​​how to give metal recycled a new life. For his hometown, he created several unofficial sights, one of which was especially fond of the cameras of the townspeople - a sculpture of a dinosaur in human height, guarding the building of the city archive. In Yaroslavl there is also a personal gallery of the master.

The exhibition "Alternative Evolution" will be the second personal project of the artist in Moscow and the third in the world - before that Denis Kulikov held a solo exhibition in Qatar. The exposition of “Alternative Evolution” included Kulikov’s sculptures on the theme of marine scenes, the subtle and mysterious world of insects, the history of dinosaurs, as well as a series of Cosmoflora works, which include the artist’s thoughts about space plants growing in abstractly other worlds.

Thanks to its detailed execution and exaggerated scale, the insect world in Kulikov’s works allows the viewer to get to know this amazing side of the earth fauna closer and more attentively and at the same time offers a fantasy how realistic this scale of insects would be in an alternative dimension or in our reality under other conditions.

As part of the “Alternative evolution,” the artist also explores the presence of dinosaurs in human life. Often we ask ourselves, “What would happen ...?”. What if dinosaurs lived among us? What would we find a way to coexist? Denis Kulikov offers reflection on a non-existent reality and an opportunity for the viewer to make his own judgment.

The world of aquatic life is full of mysterious creatures. One of the central sculptures among marine subjects is the "Shark". Exploring the underwater world, its hierarchy and mythology, the artist turns to the image of an ancient predator. The shark, with which the viewer hardly wants to meet face to face in reality, freezes in front of us in motion: an open mouth signals a readiness for an attack. Kulikov examines the variability of the psychological interpretation of this image, provoking the viewer into personal associations: the dualism of threat and natural power, inspiration of fear and a sense of strength becomes a mediator between the viewer and the object of art.

Finally, the world of cosmic plants, with their futuristic forms, has the viewer disposed to endow this world with fauna, populate it with alien creatures, and imagine his own universe from the starting points of support. The viewer's imagination as plastic matter merges with the heavy structure of the metal and gives it life.

Metal sculptures create the effect of cyberization of flora and fauna for the viewer. Iron limbs recall the futuristic ideas of cyborgs. Here, the artist considers alternative evolution from various angles - can a living creature with mechanical limbs be called a new continuation and a new round of evolution? It should also be noted that the metal itself is evolving in the hands of the sculptor, which creates a second life for metal waste.

Each Kulikov’s work, woven from dozens of spare parts, is unique - it is impossible to create a copy of the original, all sculptures are exhibited and sold in a single copy.