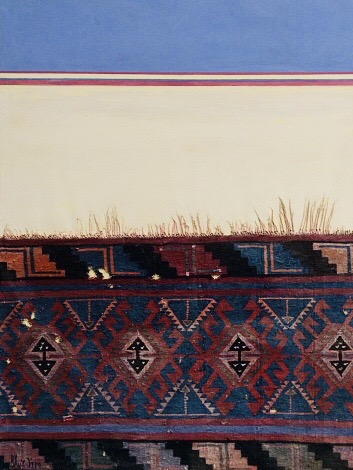 Vasil Hannanov from those artists who do not paint pictures, but create them at the call of their own feelings. The author observes the internal processes and fixes them in the form of vivid and distinctive images that are born in the process of the act of creation.
In his practice, the artist uses the usual canvas and oil. The non-standard approach of Hannanov lies in his experimental approach: he uses elements of fabric, playing with changeable lines of folds, forming a finished pattern, as well as fragments of authentic carpets of the past and the century before last. Think about the symbolism of the carpet.
Carpet - the embodiment of a dream, a flight over the ordinary, the transition from earthly to heavenly, as well as an attribute of prayers in the Muslim tradition. The secrets of carpet weaving were carefully passed down from generation to generation. Often, the whole family worked on one carpet all their lives, so these products are rightly valued as the highest works of art. In this regard, we can talk about the depth of the symbolic content of Vasil's works.
It is as if the artist transfers onto the canvas the information-heritage of his people through carpet codes-patterns, thereby capturing the memory of his traditions and roots. The exhibition “Homecoming ...” resonates in the hearts of the viewer, as it covers the themes of home, family and traditions.


Vasil chooses contrasting pure colors with a large area of ​​color distribution. The avant-garde artists of the early twentieth century often resorted to this technique, and to this day the method does not lose relevance. This is another feature of the work of Vasil - this is a combination of traditional, national motifs and modern, relevant methods.

The exposition of the exhibition “Returning Home ...” leads the viewer from the muted range to an increasingly warm, juicy, and at the peak of the exposition the “traveler” faces the luminary, from which it is impossible to take his eyes off. Presenting to the most powerful archetype, consciousness feels a comprehensive light that spreads over the exhibition space and is transmitted to all living things.
Such a route through the exhibition is a metaphor that sends us thoughts to the existence of man on Earth and to the eternal search for truth. Of course, the road to truth has no end, unlike our exhibition, but in Vasil’s works one can feel peace, a return to the roots and the actualization of the moment: here and now. The main task of Vasil Hannanov is to arouse the viewer a strong sense of empathy, moral purification, exaltation of the soul through art, catharsis.