Russian artist originally from Nizhny Novgorod. After graduating from art school, and, having received a humanitarian higher education, 10 years engaged in the implementation of PR strategies in the music field. Returning to the origins of her true being, and already fully immersed in the field of visual art, Stella chose the path of a conceptual artist.

The artist puts a deep idea into each of her series of works or a separate work, diligently combining topical issues for modern Homo sapiens and aspects of the eternal values ​​of mature humanity. For Stella Labuzhskaya it is especially important to present her creativity not just as an informative part of modern art, but, first of all, to create a communication environment for interaction with the audience.

“If my art can influence the transformation of at least one person on his way to the best version of himself, then the movement of my hand in the wake of thoughts and feelings is the best route that the universal GPS has laid for me.”

Thanks to the use of a special author technique, the works of Stella Labuzhskaya are easily recognizable. The combination of original patterns with sophisticated texture can be seen in almost every work of the author.

Labuzhskaya is a participant and winner of many international and Russian competitions of contemporary art. So, in the summer of 2016, she represented Russia in the international project ART CIRCLE (Slovenia), and in the spring she became the finalist of the START in ART competition (gallery K35 (Moscow)). In 2017, she became one of the participants as an artist and co-curator of the Theory of Red Holes project as part of a parallel program of the 7th Moscow Biennale of Contemporary Art. In the same year, the work of the artist “The Portrait of Hans Gabor” was presented to the collection of Isabella Gabor (from the Moscow Musical Theater “Helikon Opera”) on the occasion of the 37th international Belvedere competition.


Pictures of the artist can be found in Russian and European galleries and public museums, as well as private collections. 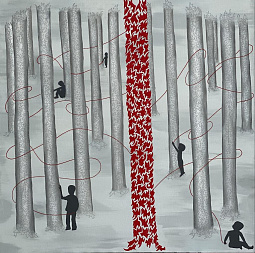